A vision for next major city centre regeneration site revealed 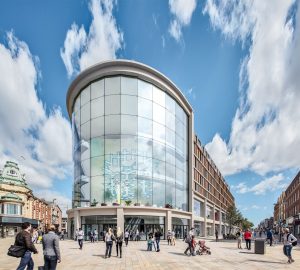 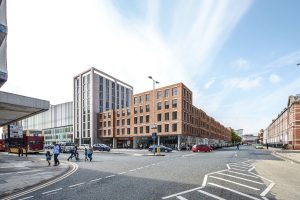 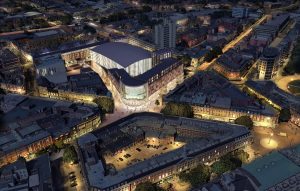 As plans for major investment and the redevelopment of Kingston House, Bond Street are unveiled, Hull City Council has today revealed stunning new visuals for the development of neighbouring Albion Square.

The images show the vision and scale of the proposed development of this prime city centre site, which is identified as a priority  Enterprise zone in Hull and is allocated in the council’s new Local Plan for a retail led mixed use development. The 1.7 hectare area earmarked for development encompasses the former BHS and Co-op building, the Edwin Davis building, the Albion Street car park.

The site has also been identified as a potential home for a newly-built ice arena, meaning the current site on Kingston Street may be redeveloped into prime city centre housing in the future, potentially producing a significant capital receipt which could be used to fund this or further redevelopment.

The plans also include the ambition to retain the 1963 Italian glass mosaic Three Ships mural by Alan Boyeson that has attracted much public support since the closure of BHS.

“Following the announcement of key private investment into the full redevelopment of Kingston House, we are delighted to introduce our vision for Albion Square.

“The site is the only one of its size in the primary shopping area of the city centre and could deliver a significant element of the additional retail floor space projected to be needed in the city over the next 15 years.

“These two developments, together with the newly refurbished Hull New Theatre and opening of the UTC, both in September, will breathe a whole new lease of life into this area of the city centre.

“Following the regeneration of the Fruit Market and the public realm improvements, it is time to focus on the core of the City Centre’s retail circuit. The visuals released today show the ambition for this development and provide the platform to securing further private sector investment into this part of the city.

“However, this investment will be largely dependent on ensuring private sector confidence in the city centre continues and central to this is ensuring that the city centre remains the destination for all significant retail development.

“The Albion Square scheme alone would be worth around £130m to the local economy, providing much-needed jobs for local people, alongside regenerating a area of the city centre that has been neglected for many years.  It would also help to further strengthen the retail and leisure offer of the city centre as whole, and in turn attract greater footfall and spend to the city centre.”

A report will go to the council’s cabinet in October to approve proposals for assembling the site and marketing the scheme to potential developer partner.

Planning Committee has today accepted the development brief for Albion Square in the city centre for ‘each or any of the recommended purposes’.

The development brief provides a concept of what scale of redevelopment could be delivered on the site.

When identified in the second wave of Enterprise Zones across the city in 2015 there became a requirement to provide a simplified planning process for assessing applications for the site.  As with other Enterprise Zones across the city this has led to the production of a development brief.  Albion Square was allocated in the Local Plan (which was consulted on over the summer) as a retail-led mixed use development.

The development brief identifies Albion Square as a prime site for regenerating into a space that is likely to feature retail, housing, leisure and enhanced parking facilities. The area earmarked for development encompasses the BHS and Coop building, the Edwin Davies building and the Albion Street car park.

Councillor Martin Mancey, Portfolio Holder for Energy City, said: “The approval of the Albion Square development brief by the planning committee demonstrates the desire to continue the renaissance of the city centre and should support bringing this site forward as a priority in the next few years.

“The creation of the new square outside the former BHS store and the vacation of the entire block now provides an opportunity for a comprehensive redevelopment of the site.  This is the only site of scale within the primary shopping area which could deliver a significant element of the additional retail floor space projected to be needed in the city over the next 15 years.

“The redevelopment of this area is dependent on attracting a private sector developer who is capable of funding, and committed to delivering, redevelopment on this scale within a reasonable timescale.

“We believe that our current investment in the Public Realm, the Ferens, Hull New Theatre and Hull Venue, coupled with major private sector investments including those by Siemens, RB, Smith & Nephew and others, together with the greater visibility of the city on the national and international stage as a result of City of Culture, will make this potential redevelopment a much more attractive proposition to the private sector. We are keen to ensure that parts of the area do not remain vacant indefinitely or are acquired for landbanking purposes.”

Alex Codd, City Planning Manager, added: “It is important that any development in this site is sympathetic to the area, and respects the Georgian New Town Conservation Area, and the retention of the monumental Italian glass mosaic called ‘The Three Ships’.

“This is a key transitional site linking the retail offer on Jameson Street through to the residential offer on Albion Street, and on to the new University Technical College and enhanced New Theatre beyond.”